IP Problem Finder makes it easy to read a packet trace so you can diagnose network problems FAST.

The IP Problem Finder suite of products can tremendously speed network diagnosis and repair. Typically, 20% of network problems take up 80% of your diagnostic time. But IP Problem Finder can reduce that burden dramatically.

IP Problem Finder is developed and owned by Inside Products.

IP Problem Finder is a suite of four products that run as HTTP services on Windows® platforms:

IP Problem Finder reads trace data and reveals the source of the problem much, much faster than any manual examination of that data–whether for calculating traffic volumes and throughput speeds, identifying the precise location of bottlenecks, or examining hardware configuration and network topology.

The IP Problem Finder suite of products can tremendously speed network diagnosis and repair. Typically, 20% of network problems take up 80% of your diagnostic time. But IP Problem Finder can reduce that burden hundreds of times over. For example…

A Credit Union’s backups processed much too slowly. The backups go by FTP to an off-site disaster recovery provider. Transfers from the mainframe are fine. Transfers from desktops are extremely slow. The credit union tries various fixes, including upgrading network connection speed for their VPN.

Nothing works, until the credit union turns to a packet trace: tens of thousands of records analyzed with the TCP Problem Finder. Just 5 minutes later, they know: 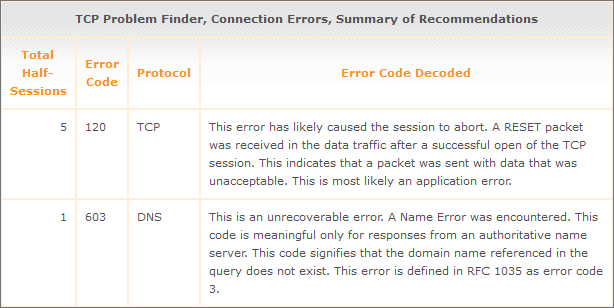 Once the VPN is fixed, another trace analysis with TCP Problem Finder shows that transmission speeds have doubled.

A Law-Enforcement Agency uses cell-phone connections to a server, then by VPN to a data center. But the connections keep dropping.

The agency spends many weeks looking the reason, and pointing fingers at various players.

Then the agency spends just one hour with TCP Problem Finder mining trace data. They learn which server is being reset by which router. They replace the bad hardware.

A Financial Institution has trouble implementing secure transmission for a CICS Application. After several departments spend several weeks failing to troubleshoot, a network systems analyst uses the SSL Problem Finder to reveal–in one day–a “double-encryption” problem. The TCP stack and the CICS application are both encrypting the messages. A bit of re-configuration makes the trouble disappear.

Mission Impossible: Analyze Over 300 TLS Sessions in One Hour

Watch how thousands of packets with TLS sessions are analyzed efficiently with the help of SSL Problem Finder.

We offer individualized product demonstrations by request. Your organization can also try SDS Software on your system for 30 days, free of charge.

Request a Free Demo or Trial
Scroll to top

This site uses cookies. By continuing to browse the site, you are agreeing to our use of cookies.

We may request cookies to be set on your device. We use cookies to let us know when you visit our websites, how you interact with us, to enrich your user experience, and to customize your relationship with our website.

Click on the different category headings to find out more. You can also change some of your preferences. Note that blocking some types of cookies may impact your experience on our websites and the services we are able to offer.

These cookies are strictly necessary to provide you with services available through our website and to use some of its features.

Because these cookies are strictly necessary to deliver the website, refusing them will have impact how our site functions. You always can block or delete cookies by changing your browser settings and force blocking all cookies on this website. But this will always prompt you to accept/refuse cookies when revisiting our site.

We fully respect if you want to refuse cookies but to avoid asking you again and again kindly allow us to store a cookie for that. You are free to opt out any time or opt in for other cookies to get a better experience. If you refuse cookies we will remove all set cookies in our domain.

We provide you with a list of stored cookies on your computer in our domain so you can check what we stored. Due to security reasons we are not able to show or modify cookies from other domains. You can check these in your browser security settings.

These cookies collect information that is used either in aggregate form to help us understand how our website is being used or how effective our marketing campaigns are, or to help us customize our website and application for you in order to enhance your experience.

If you do not want that we track your visit to our site you can disable tracking in your browser here:

We also use different external services like Google Webfonts, Google Maps, and external Video providers. Since these providers may collect personal data like your IP address we allow you to block them here. Please be aware that this might heavily reduce the functionality and appearance of our site. Changes will take effect once you reload the page.

The following cookies are also needed - You can choose if you want to allow them: